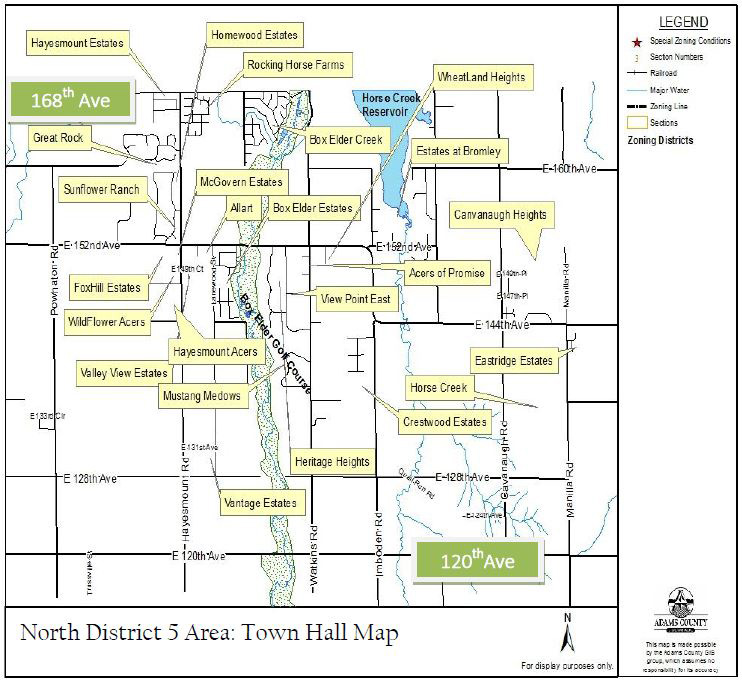 The North District 5 area encompasses approximately the communities between 120th Avenue to 168th Avenue and Powhaton Road to Manilla Road. It boarders Brighton to the west, Denver International Airport to the south, and the Bennett and Strasburg communities to its east. This community is an eclectic mix of new development and agricultural lands and businesses.

View current crime and traffic incidents as reported to the Adams County Sheriff's Office with this interactive map. 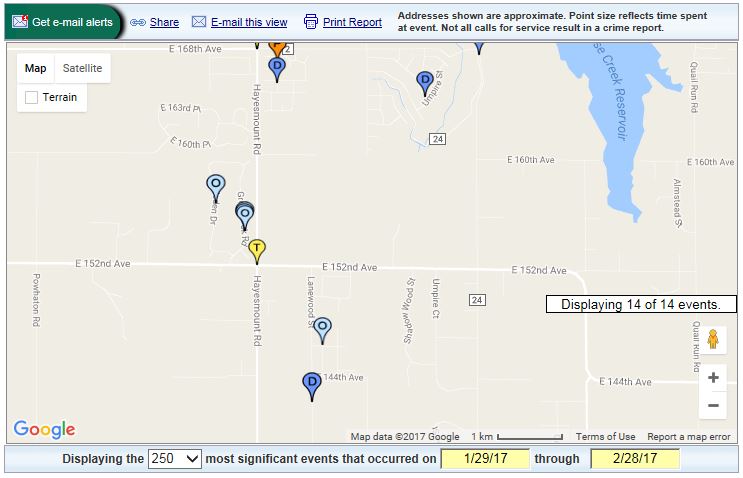 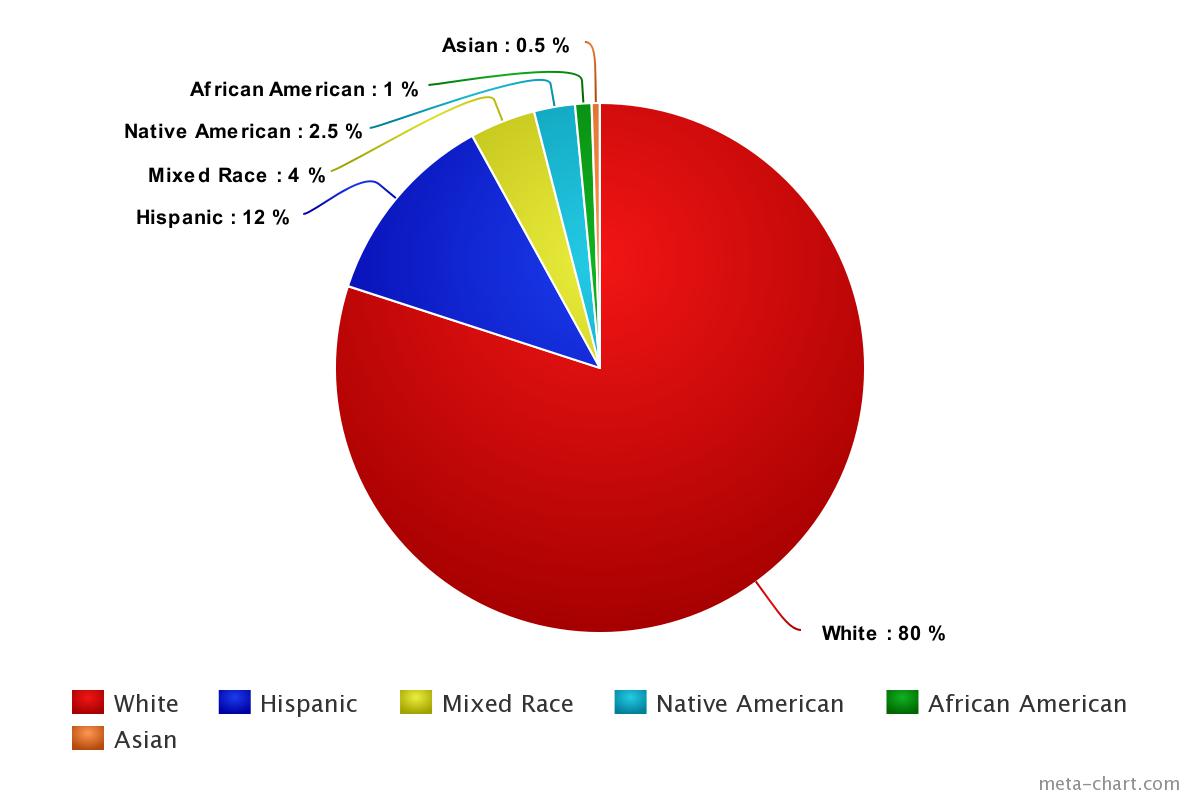 Look up code enforcement violations and building permit applications through our interactive tool Eye on Adams:

Land Use Cases: For current land use cases, visit the county's Community Economic and Development's Land Use Case site.

Marijuana Information: There are no marijuana businesses within the identifed area. For more information on marijuana licensing in unincorporated Adams County, visit our Marijuana Licensing page.

Below are current top projects and priorities identified by Parks and Open Space:

Adams County has a long standing policy aimed at protecting Box Elder Creek and the corridor’s floodplain which flows north along the eastern edge of Denver International Airport (DIA) from the community of Watkins in southern Adams County. The County has worked hard to preserve the rural land uses and prime agricultural areas surrounding the creek through policy and zoning mechanisms. The area has been under development pressures for the past decade; however, a large floodplain area has somewhat limited the encroaching development. North of the airport, the creek is recommended to be conserved as part of agricultural conservation easements. Acquiring lands south of 128th Avenue as open space will permanently protect this stream corridor, allowing for the creation of public trails. Preserving this land as open space will act as a buffer between the urban and more rural areas, creating separation of development between DIA, Aurora and Watkins. Arapahoe County has also made conservation of Box Elder drainage a high priority.

Aurora Campus for Renewable Energy is planned along Box Elder Creek, south of DIA and north of I-70. The plan designates approximately 460 acres along Box Elder Creek for park and open space area. The plan includes concepts for restoration of the riparian corridor that would serve as a wildlife corridor and regional trail corridor.

Agriculture has historically been the economic staple of the County and provides the rural atmosphere that residents greatly appreciate. The County-wide survey results show that over 92% of residents agree that working farms and ranches should be preserved in Adams County. Respondents felt that allocating open space funds to preserve working farms and ranches was just as important as purchasing land for trails, recreation, or wildlife protection.

In the western portion of the County, productive agricultural lands have been developed into neighborhoods, commercial and industrial areas. The agricultural lands that remain are subject to market forces and cultural shifts that are challenging the continuation of farming operations. The development of these lands will mean the permanent loss of fertile agricultural soils of state-wide importance. Once the high quality soils are converted to urban use a major finite resource is lost. The loss of farms also means a decrease in economic diversity, a reduction in local food security, and a decline in stormwater infiltration, as well as changes to the rural character and scenic views and other open space values.

With some adaptation and the creation of a hospitable environment it is possible for farming to be viable in an urban setting and provide benefits to the community. Avoiding further fragmentation of the farmland and sustaining farm-supporting businesses (such as feed and equipment dealers, veterinarians and other agricultural services) is essential for sustaining farming operations. Agriculture is most viable when a number of operations are adjacent to one another with limited interruption by development. Fragmentation of farms also leads to “impermanence syndrome.” This is a condition in which farmers are never certain whether or not their neighbors will be rezoned for development that will render farming difficult if not impossible. This condition convinces farmers that land conversion is inevitable and that farming and rural life in general are doomed in their area. This conviction causes landowners to defer stewardship and forego agricultural investments.

The intent of the County’s agricultural preservation efforts is to help farmers and ranchers challenged by development pressures to remain in business through offering voluntary and incentive-based methods. The more agricultural land which can remain in viable production throughout Adams County, the more sustainable the local agricultural economy will remain. Since landowners have different needs, a range of options are available through the open space program. Conservation easements, transfer of development rights programs, and assistance from land trusts are some of the mechanisms for assisting interested property owners in conserving their lands for agricultural purposes.

The agricultural lands to the east of Barr Lake are important scenic and ecological buffers to Barr Lake. They are also highly productive agricultural lands and many are quite large in size. While some of this area is within the Denver International Airport noise contours that restrict residential home building, the restrictions do not prohibit commercial or industrial structures from being built. The Agricultural Reserve is the most likely location that long range development will spread to the east, reducing the amount of active farmland within the County. Conservation easement investments should be focused in this area rather than locations further to the east that are less likely to be converted from agricultural use within the next ten years.

Roughly 3,000 acres of this land is designated as Denver International Airport Reserve, where potential conflicts from the airport are the highest due to the location of runways. Most of these lands are owned by DIA and are currently set aside for open space, agricultural activities, and oil and gas wells. However, the designation is not permanent and it is possible that it could be converted to other uses in the future. The Agricultural Reserve is compatible with the future plans of the airport to become a hub for food processing, storage, and distribution.

Barr Lake State Park is highly valued by residents and visitors for many recreation activities, nature education opportunities, and the scenic environment it provides. Abundant wildlife is dependent on the State Park lands and surrounding properties for habitat. Rocky Mountain Bird Observatory (RMBO) works with the State Park to create programs and events that educate the public on environmental and habitat issues. More than 350 species of birds have been spotted in the park and it is well known for its eagles, blue herons, white pelicans, cormorants, egrets, and hawks. Diverse fish populations are found within the lake, making this a popular spot for anglers. Mule deer and white-tailed deer are also attracted
to Barr Lake. Lands have been preserved surrounding the park to ensure the habitat and ecological resources such as streams, wetlands, and large cottonwood trees continue to enhance the quality of Barr Lake State Park.

As development and major infrastructure projects have begun to spread to the area surrounding Barr Lake, there has been increased concern for how these changes will impact the scenic and natural environment. The Flood Control Overlay Zone surrounding the canals to the north of Barr Lake State Park are important areas for future open space preservation. Open Space protection is also a proposed element of this plan for buffering Barr Lake from Interstate 76 and E-470. Third Creek and its floodplain are included in the proposed open space buffer area as well. Lands to conserve for the State Park were first identified in the 1996 Conservation Vision Plan document followed by a Management Plan in 1999. This Master Plan proposes the lands identified within the previous plans and other surrounding significant lands should be a priority for acquisition as open space in order to permanently protect important resources and provide the opportunity to restore habitat.

Many east-west oriented roads are currently used by cyclists for recreation and some long-distance cycling races are held on urban and rural roads. However, narrow road width, heavy traffic patterns and high speeds make this activity uncomfortable for many riders who wish to explore the area. This situation could be greatly improved with some improvements being made along designated routes to accommodate biking. While some of the municipalities currently have on-street bike routes, the County does not have designated or signed roads for cyclists. This plan introduces the idea of creating long distance, regional on-street bicycle routes for recreation purposes where organized bike rides and races, which are growing in popularity, can take advantage of improved routes that are currently not available. The County’s on-street routes will link to existing and proposed multi-use trails, existing and proposed open spaces and parks, and stretch into the eastern parts of the County.

Riverdale Road Bikeway: The scenic qualities and interest of Riverdale Road currently attracts many cyclists and is often under heavy use. While a multi-use trail is proposed parallel to Riverdale Road linking Ken Mitchell Open Space and the Regional Park, it is thought that this roadway will continue to be used by more experienced cyclists that feel comfortable biking on the roadway. The on-street route will require safety improvements of widening shoulders in certain segments as well as signage to alert cars to share the road with cyclists. The route will connect to Thornton’s proposed multi-use Riverdale Trail and connect to other multi-use city routes.

Below are current projects and top priorities identified by the Transportation department.