A tornado is a violently rotating column of air extending from a thunderstorm to the ground. The width of a tornado is generally less than half of a mile, but the length of the destruction path can be from a few hundred yards to dozens of miles. A tornado can also move at speeds of 30 to 125 mph, generating winds exceeding 300 mph.

In Adams County the risk for tornadoes is high. In the Colorado Front Range, tornadoes have been reported in nine months of the year, with the peak season for tornados in Adams County extending from mid-May through mid-August. June is by far the month with the most recorded tornadoes. Tornadoes have occurred at every time of the day, but over half of them have developed between 3 p.m. and 6 p.m. They also occur statewide, but by far the greatest number develops in eastern Colorado east of I-25. Since 1950, the two counties in the state with the most tornadoes have been Weld and Adams (NCDC).

The NWS advises that tornadoes strike randomly, so all areas within the county are at risk, but development in east Adams County will be particularly more vulnerable to tornadoes, as most of the tornadoes recorded have occurred further away from the foothills. Tornadoes will continue to occur in our County; predicting the location and how severe the event is impossible but this fact stresses the importance of taking steps to prepare yourself and your family today.

In the United States, tornadoes are classified by the Fujita Scale, which assigns numeric scores from zero to five (or higher) based on the severity of observed damages. Tornadoes can cause significant damage to structures, trees, utilities, and crops, and they have the potential to injure and kill people. With advance warning, people can evacuate to safe-rooms, basements, inner-most rooms or other more structurally sound areas within the building. But warning systems are not fool-proof and should be considered secondary to personal preparedness and rational action to protect ones’ own safety. Mobile home parks are extremely vulnerable; even if the mobile homes are anchored down the structures provide little protection. Towers and overhead transmission lines are extremely vulnerable which when damaged can further hinder emergency response and recovery efforts. 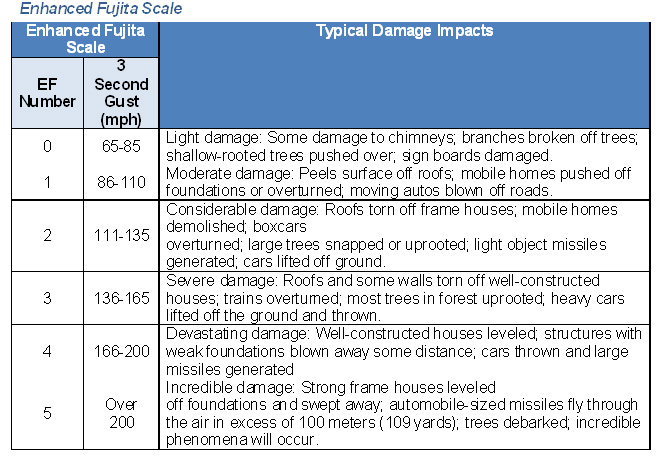 Before: To begin preparing, you should build an emergency kit and make a family communications plan. •Listen to NOAA Weather Radio or to commercial radio or television newscasts for the latest information. In any emergency, always listen to the instructions given by local emergency management officials.

During: If you are under a tornado warning, seek shelter immediately! Most injuries associated with high winds are from flying debris, so remember to protect your head.

After: A study of injuries after a tornado showed that 50 percent of the tornado-related injuries were suffered during rescue attempts, cleanup and other post-tornado activities. Because tornadoes often damage power lines, gas lines or electrical systems, there is a risk of fire, electrocution or an explosion. Protecting yourself and your family requires promptly treating any injuries suffered during the storm and using extreme care to avoid further hazards.

To see the full list of disaster preparedness tips for thunderstorms, visit www.ready.gov/tornadoes.